FANNIE SUNTAG & TOMJO FRANKIN release their new album entitled 45 Tours Après. The title translates as 45 Tours Later. The album is the fruit of the symbiotic musical relationship of some 20+ years of making music together and exploring different sounds and collaborations. It spans 31 minutes or so of a compilation that clearly steams from the duo’s extensive musical experience as individuals and as a pair.  In spite of the duo wanting to present it as an EP, the technicality of that extra 1 minute caused the release to be considered an LP. 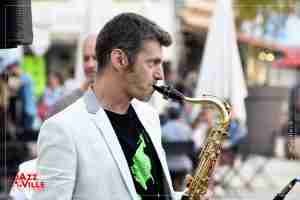 The release combines their experience and craft. The two veteran musicians are accomplished in their own right as evidenced in Fannie Suntag & Tomjo Frankin ‘s interview. However, with each other, they embark in a universe much closer to the song, and to the composition “thanks to Fannie”, Tomjo reveals. Their professional career is symbiotically linked and they do not intend to stop, despite the unfortunate pitfalls of life. Their first album showcases what we would have been missing.

The EP/LP includes 8 tracks. 1 In Music favourites are tracks 1 and 2, respectively Norma’s Song and the funky Le Soleil. The dance instrumental Ambient Speed One also made a really good impression.

The 2 minutes and 33 seconds Norma’s Song track is bewitching. It blends the fragile vocals typical of Gainsbourg’s preferred French female singers’ vocals. This highlights the eerie and haunting nature of the song. The duo revealed that the Bates Motel series and Marylin Monroe inspired the song.

Is it Trompette? mixes the freedom of Jazz with the out of the box sound that the sound is trying to emulate. In spite of its almost childlike sound, there is a philosophic and inspirational lyricism in the playful track A petits pas.

Tracks from the 45 Tours Après Album

The tracks effortlessly go from French to English and back. The duo goes from eerie to Funk, from electro sounds to Jazz and much more. You cannot be bored. There is, in this whole musical journey, the traces of the madness and happiness with which the pair allows creativity to indulges them and we definitely enjoy the whole experience for it.

Don’t just take our word for it. Enjoy the tracks for yourself at: