An interview with singer, rapper and songwriter Lil Murky

1In Music meets with Lil Murky, singer-songwriter and rapper from London, England. Lil Murky is a multi-instrumentalist who plays the piano, the trumpet, the recorder, the guitar, the violin and the drums. He was brought up listening to Eminem, Lil Wayne and bands such as Oasis, the Beatles. Which later lead to me making my own music in 2021. I bought my home studio equipment with birthday money from my 18 birthday. And I guess the rest in history. 1 In Music meets Lil Murky.

Lil Murky [LM]: There’s plenty I can offer to the listener especially uniqueness. Half of the time, I can’t even tell the genre of a song I’ve made, being from London and having more of an American style sound also adds to this element. Particularly, in songs such as Pathway to heaven and Lost in the darkness by Lil Murky, you will find out my uniqueness.

1 In Music: What or who shaped your music and who supports you?

1 In Music: When did you realise you were going to make music professionally?

LM: Probably very recently as I’ve seen my progression from being in the music game for a short amount of time. It started out as fun but I definitely wanna see how far I can take it now. 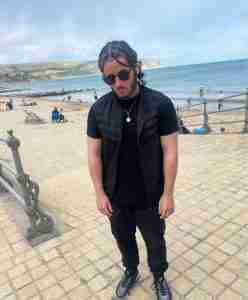 I’m literally a music nerd. I listen to everything as long as it doesn’t hurt my ears, for example when they shout in songs, etc. My favourite genres however would be Lofi, Melodic Rap, Hip Hop then everything else follows.

LM: Juice WRLD, in my true opinion in his short amount of time here I think he’s the goat. To make 3000 songs in less than 2 years and have a different style for the majority of them. Being able to freestyle on the spot for an hour twice. And some of the big collabs he’s pulled off. I really think he’s up there. But as in undervalued I’d say Don Toliver, I think his voice and unique style is incredible.

LM: I haven’t had any yet, but let say I have. I would do a few rehearsals, do some vocal warmups and get rid of the raspiness in my voice… and go for it.

LM: I enjoy training , keeping my fitness up. That could be in the gym or boxing training, playing on the PlayStation , when I can. Favourite games are GTA 5 and Fortnite. Other than that, I’d watch some sports such as Football/Scoccer , UFC, WWE, Boxing, etc.

LM: I would love to help people’s state of mind with my music and for them to feel a deep connection to it especially when I make my sad music. But…

LM: I’ve got many suggestions cause when I first started, I didn’t have a single clue how to use the DAW, which is Logic Pro. I was paying silly amounts for mix and masterings. So for me, I would say:

make sure you understand the DAW and teach yourself how to mix your own music. It will save you money and there’s no room for era when they send it back. Worth the headache trust me.

1 In Music: Tell us about your latest single…

To stop going through hell I had to team up with the devil” 6 songs featuring 4 awesome underground artists. This project means a lot cause I was holding on this name for a while and was praying no else would use it. I love the concept I’ve created in this scenario , And to stop being put through hell, I had to be the devils apprentice in hope that would stop.

LM: Absolutely. I’ve got 3 more singles dropping this year and there all different styles. Which would be a Pop Acoustic song and a Drill song. The other song is a remix of a song on my recent project.

1 In Music: Where do we find you music?

LM: On all platforms by searching the name “Lil Murky”.

We use cookies to ensure that we give you the best experience on our website. If you continue to use this site we will assume that you are happy with it.Ok