COLD READING’s New Single ‘THROUGH THE WOODS, PT. 1’ OUT NOW

COLD READING’s NEW SINGLE ‘THROUGH THE WOODS, PT.1’ OUT NOW

After a one-year break from playing shows, Swiss Alternative Rock band COLD READING are back with an extended line-up and a new single ‘Through the Woods, Pt.1’!

The band, that now operates as a quintet after the addition of guitarist Alain Schurter, has spent the past year intensively working on new material. In October 2018, they finally hit the studio to record the new songs with producer Jan Kerscher (Mutiny On The Bounty, The Intersphere, EF among others) at Ghost City Recordings in Germany.

The result is a three-part concept album, the parts of which will first be released as digital EPs and then as a full-length album on vinyl. The first EP is called “Part 1: Past Perfect” and will be released on May 24th digitally via Berlin based label Krod Records. On April 9th, the EP’s lead single ‘Through the Woods, Pt.1’ will be released, its name already alluding to the multiple part overall project.

Single Through the Woods Pt. 1

The first single opens with a powerful and intense riff, next to which the following first verse seems almost fragile. With atmospheric synthesizers and subtle guitar lines, Cold Reading draw back to leave room to vocalist Michael Portmann’s lyrics. The almost apprehensive mood evoked here dissolves masterfully into a hopeful, driving chorus. ‘Through the Woods, Pt. 1’ manages the feat of simultaneously marking the first chapter of something bigger, as well as standing on its own as a song. Singer Michael Portmann describes the lyrical content as follows:
‘Through the Woods, Pt.1’ addresses the handling of unexpected life changes. After the involuntary exclusion from a familiar environment, the lyrical “I” initially remains disoriented and hopeless. After a gradual recognition of and adaptation to the new reality, a journey of self-discovery through time and space follows. Standstill becomes movement. The listener therefore observes a maturing process of the fictitious protagonist.”
Stream single on your favourite site

In the first part, ‘Past Perfect’, which will be released on 24.05.2019, the human tendency to glorify the past and mourn missed opportunities is at the centre. COLD READING tell tales about getting caught up in nostalgia and romanticising the melancholy that comes along with it, all wrapped in powerful and expressive compositions. The retrospection was retained tonally by recording all tracks with analogue devices and instruments. This consistent step gives the Past Perfect EP an unmistakable old-school touch. The raw, yet accessible songs draw from the sound of the late 90s/early 2000s Emo/Post-Hardcore movement, forming a seamless transition from the band’s previous EP ‘Sojourner’.
Tracklist – “Part 1: Past Perfect”
01. Through the Woods pt.1
02. Past Perfect
03. Mono No Aware
04. Escape Plan Blueprint / New Domain
‘Part 1: Past Perfect’ will be released on 24.05.2019!
Spotify pre-save link: https://save-it.cc/imusician/ColdReading-Part1PastPerfect
Album pre-order link: http://www.krodrecords.shop/products/639091-cold-reading-new-album
LIVE DATES
12.04.2019 – CH – Winterthur, Salzhaus w/ Madsen
13.04.2019 – CH – Luzern, Konzerthaus Schüür w/ Madsen
+ Tours in the UK, Germany, Switzerland, Belgium, Greece and more…

COLD READING have released an album ‘Fractures & Fragments’ (2015 / Flix Records) and an EP ‘Sojourner’ (2017 / Krod Records) and were able to celebrate various successes e.g. support shows for The Get Up Kids, Four Year Strong, The Hotelier, Fjørt, playlist placements on Rock Brandneu, Rock United (Cover), Top of the Rock, The Scene, Alternative Generation and lots more as well as features in LOUDER, MOSH – Hit The Floor, New Noise Magazine, Already Heard, Punktastic etc.
The band is: 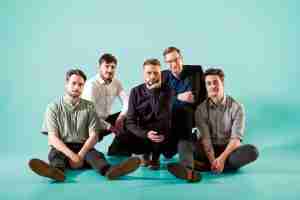