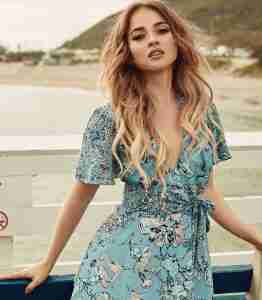 From the catwalk and magazine covers to the stage, Ellen Alexander glides effortlessly. The multi-faceted artist builds a reputation at the four corners of media and entertainment. A Fashion Model, an Actress, a Singer and an Entrepreneur, the artist is establishing herself around the world from her native Moscow (Russian Federation) to her US residence via the UK. Having already conquered the fashion, and the cinema and television industries in front of and behind the camera, she is now setting her sight and voice to the music industry. 1 In Music meets this multi-talented artist for the release of the music video of her stunning new single Shadows.

1 In Music: Thank you for taking this interview. We’ve just listened to Shadows (again) and we are excited for you. How would you introduce your music to our audience?

Ellen Alexander [EA]: My music is a mix of different styles. I get my inspiration from different Pop artists, such as Camila Cabello, Ariana Grande or, for example, Kygo. My goal is to always try to create decent music, that my audience will like. I experiment in different genres but usually create popular Pop music.

1 In Music: Who are you biggest supporters?

EA: My biggest supporters are my friends, people that are around me. I can also say that my coworkers, people who I work with at the studio support me and played a part in shaping my music.

In Music: When did your desire to make music professionally awake?

EA: I am still in the process of making music professionally. But I think the desire to create music comes from my childhood. I used to dance, sing in a church choir and was a very creative child. Right now, I am very busy with different activities in my life. I am writing books, planing to shoot movies, working on my social media, so I’m still working on it.

In Music: What a busy creative bee you are! So when you have time, what music do you listen to?

EA: These days, I have been listening to a wide range of Pop music. I like modern times Pop music. I particularly like current Pop artists like Harry Styles, Katy Perry, Camila Cabello or Alan Walker. These are the ones I often listen to.

EA: There is a band I recently found. They’re called “Moran Magal”. I really was pleasantly impressed by their music! They aren’t a famous band but I really enjoyed listening to them! And of course, I was wondering if I could collaborate with them some day. 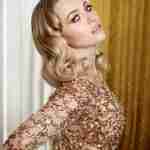 EA: I don’t perform much so I don’t really have a preparation routine, for now. But in my childhood when i was singing in the choir, my preparation routine would consist of rehearsing the performance beforehand. I always liked to prepare well and would rehearse several times a week, before performing.

1 In Music: We already know of at least some of your other passions but tell us more about them.

I’m passionate about movies, photography, art, modeling, social media. I have many different projects that I am working on now. Writing books, working on my social media presence (like Tiktok, Onlyfans and Instagram), modeling for different magazines… are just some of them.

1 In Music: Success to you is…

Success to me is about being truly happy, having good people around me, being able to live on my craft and to live on my talent and my business. 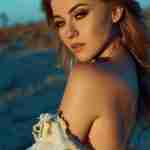 Don’t worry and just focus on what you really want to do.
Don’t bite your nails about things that are not relevant
like boyfriends and relationships, feelings, it comes and goes.
Focus on your career.

EA: Yes! Soon I am going to release more Rap music, I am also preparing new music videos. And as my fans know, I am developing music constantly.

1 In Music: Thank you for this interview. Finally, where can your audience hear, stream, download and buy Shadows and find more about you and your music? 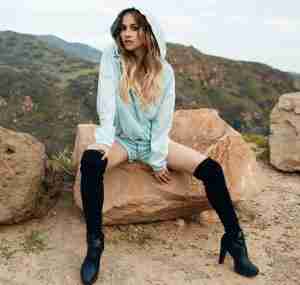 Music Review: Who do you love? by IMAGE

RnB group IMAGE releases new single Who Do You Love?

The sound of band IMAGE takes you back to those classic vintage RnB moments. From the outset, the single “Who Do You Love?” sets the characteristic mood with its groovy beat, soulfully harmonising vocalists and instrumentation. It invites you in, very much in a soulful fashion. As you would expect ads that electronic instrumentation that the 50s introduced and the 60s adopted a bit too systematically. But with the nostalgic cliche comes a lot of the good, such as the smoothness, the saxophone and more. In particular, the harmonies exploit the different vocal ranges to the song’s advantage, giving it a unique touch within the style. The track replunges you right in an unforgettable era, a feat seldom accomplished with today’s music.

The song has some big names attached to it. Platinum producer and songwriter Charles Simmons wrote and produced the song and signed the band to his label Opulence Records. The Blitz Brothers and top-charting Jazz group GTF’s Richard Blitz recorded and engineered the song at Blitz Recordings Studio. The track arrangement and the artists’ dedication shows they refuse to compromise on the style that is so close to who they are. To be this dedicated to share with their ideal audience in spite of any obstacles gives them that headstart on success.

The single is available now on open.spotify.com/album/1Wjg4DqYBUK6giwau31wKU?si=2nirBOxpQDK8dTDMlEzaug 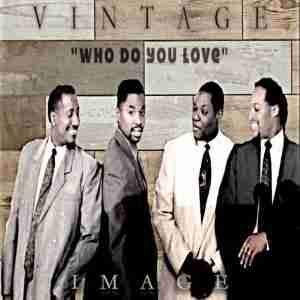 About the group IMAGE

IMAGE are former US Navy colleagues Johnnie McKnight and Kenneth Sexton, joined by Jeffrey Nixon and Palmer Perkins. Both the former band members were introduced to the group by their then producer, the late Clarence Bell.

It’s out! Telegraph has just released its first and brand new EP Simple Drive ! The three French cousins-mates are offering us a 5-track manifest of a three-year journey of work and travels, from California to Norway via Canada. They present the heart of the Telegraph project: a decidedly modern pop rock music, that is efficacious, open-minded, federative and cosmopolitan. The first four singles already hit 2 Million Streams. They have been aired on French radios and in movie theaters. This new release is the first big step in their career. Paris’ Nouveau Casino was the centre of Telegraph’s Simple Drive release party.  Over 129 people attended the party to encourage and recognose this set of new talent.
1 In Music first came across Telegraph with their single release, Down in the River, mentioned in this article. The music video for the single gives us a taste of the full release.

The trio has now made the full journey to completing the EP. The result is a four-track collection that you can acquire today at https://ffm.to/simpledrive?fbclid=IwAR11y786DtDUL29EpnByiiQ24AZlF8MfBXwJzj-YQ0KBypNJCSjnKahq1X4 . The buzz is rising and we encourage you to join the wagon!
Follow the band and find out more about their upcoming live shows on Telegraph’s facebook page.

The single showcases the artist’s intricate ability to frame a moment or a story in the magic of a simple but melodious sound. Both the acoustic version exists and the live version showcase an addictive tune. They both testify of the authenticity of a Singer/Songwriter whose guitar and vocal fuse the depths of soul with the rich heritage of Americana and the originality of Alternative music.

Indie Soull is the solo stage moniker of Mutch Katsonga. The Singer/Songwriter and Author has performed around the UK, Australasia and the US, particularly New-York City. He has gathered positive reviews on his various live and studio releases. His latest single “Hotel Bibles” is out now and available on all platforms alongside all his albums. Hotel Bibles flows from the same creative headwaters as his current EP “NYC Lives”.