Telegraph release new single Down In The River

Telegraph – new single Down In The River

Telegraph’s new single Down in the River does not waste any second of its sonic message. It starts like a moan from another world, an almost ghostly voice. The theme justifies the feeling and continues throughout the song albeit in the background. In the foreground, the instrumentation and arrangement take the listener in. There is a nice melody and a beat like a musical metaphor for a message and a heart. Before we know it, we partake in its melodious and peaceful march down in the river of our best memories. 1 In Music loves the track. We especially dig everything it seeks of freedom and authenticity with an appearant contradictory touch of modern sound.

After hundreds of thousands of streams on ‘Broken Bones’, the French group are back with their new single ‘Down In The River’. With indie rock, pop and electronic vibes, Julien, Matthieu and Maxime are exploring new musical inspirations, through soul and urban feelings. They’ve featured with the ADM Gospel choir to carry this essential and actual message:

“Did you ever get the feeling that the world is changing? That you’ll never see things the way you did when you were a kid? Imagine for one second that the river you went fishing with your dad when you were 10 years old goes dry. Would you fight against this? Would you save these few places where you felt the true nature of freedom? Do you really want to be the one to pull the trigger ? If you can see that our world is changing, you’ll understand exactly what this song is about…” 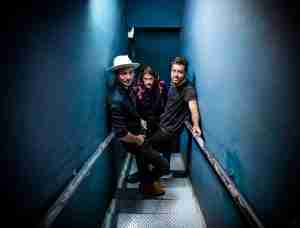 Telegraph are cousins Julien and Matthieu and their childhood friend Maxime. Their music has the breath of the South of France from where they come. It borrows the freshness and three years of music projects experience from Paris. It reinvents itself in the West Coast of the United States. There, they are inspired by their journey and the artistic and literary culture of the 1950s’ Beat Generation. The richness of this trip makes up the new music project from which the band Telegraph is born.