There’s a place where you can listen to music in the heart of Manchester, near Piccadilly Station. That is The Whiskey Jar. Of course, there are other venues but there’s surely something about this place and its organiser. Because there’s a large audience and they listen, even though the venue is a pub. I’m guessing it’s in large part due to Joe “Bagpipes“, the regular host. After all, it has the reputation of being “Manchester’s longest running and best open mic night“. On 2 Aug 2022, The Whiskey Jar Open Mic Night welcomes another lot of talented musicians. I get to hear a subset of them.

I arrived late, at the end of the third musician’s set.  I will hear later that in effect, I was on time (8.00pm) but the replacement host started early (7.30pm). I felt like a queen for that second 😁 I also later found out the name of that third musician, Jeorgia Rose. You cannot miss her in the crowd. However, it did help that she was directly in my line of sight, sitting virtually opposite me. I speak briefly with her but find out more afterwards. Research tells me she is an 18-year old British country singer. I remembered that I just left some friends who invited me to watch them line dance at the Pride parade this coming 27th of August. This happened after a Dolly cover documentary I watched. I feel country music is after me lol. So I listen to her on Jeorgia Rose Spotify from the popular I will still Remember to the two other offers at the time,

Funny musical man Chris Tavener follows. The folk comedian makes us smile and laugh with his brand of music. The acoustics normally so on point is slightly lacking in clarity so it’s hard to properly hear his jokes from the back (probably my fault for being at the back!). He has 3 songs on offer for us. The first one is All I need. The second one is How to truly win at life from his 2022 EP release Easy Ways To Be Happy and the last one Bill Gates was my favourite. I remember catching his set a while ago during a So Far Manchester I attended and reviewed in 2018. It is so good to see and hear him remain the “satirical singer-songwriter, known for his comedic, witty lyrics and a vintage sound”.

A couple of musicians speak to the host. It seems they are going to be next. Spencer Grant is on guitar and vocals. Jeremy (Howling) Webster on harmonica. Their Instagram says they are “a fresh new band consisting of a bunch of friends with musical talents”.  Tonight they are two. From their choice of song cover to their interpretation, I am in. Even the pitch slides could not hide the talent. The karaoke that messed up with Grant’s vocals does not quite matter. To have chosen the very beautiful and traditional Henry Martin as a song shows discernment. Joan Baez  would be proud but would probably have a go at them for spoiling the vocals on karaoke (or is it just me?)! Ain’t No sunshine follows and the voice seems to recover some of its original timbre hitting the pitches. The harmonica was so well played on both pieces, subtly enhancing its tone. 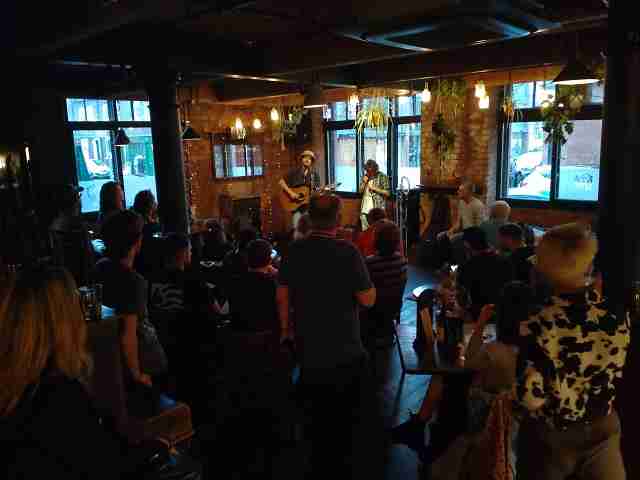 Coeur Vaillant serves us his usual brand of well-constructed songs and infectious melodies on guitar. He has two pieces for this occasion: a “love” song on a bed of 7 sins and a fight song about freedom. The public is conquered. From head voice to falsetto, the public takes the trip with the singer-songwriter. It is not long ago that we were falling in love with Coeur Vaillant’s first single Spring Always Returns. The tireless musician honours his childhood passion, working hard towards his ultimate music dream. 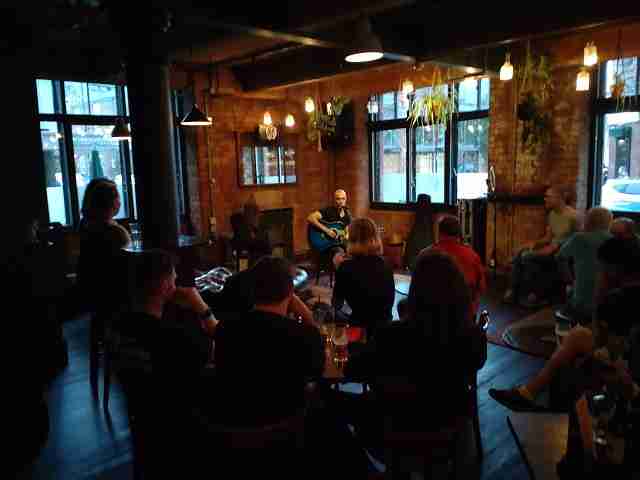 In between sets, I meet Robert. Robert is a regular audience member at the Wednesday evening open mic. But he thought he would try out the Tuesday evening open mic that the venue also offers. He explains that he comes to listen and relax. He likes the atmosphere and enjoyed the last set. I tell him the name of the last act is Coeur Vaillant. I try to decipher the enigma of the foreign name and pronunciation. Coeur Vaillant in effect is Valiant Heart in English. There is a backdrop of knight time and day dream right there. I somehow also manage to drop that I’d like to perform here. Yes, you heard it, I basically inserted right there that I too am a musician. I am half-proud to have dropped some self-promotion there, something at which I am execrable. And to mark the following embarrassment I systematically feel (which will no doubt mean no promotion for hours), I’ll move ever so swiftly to the next subject. Robert says the ambiance is different to when Joe leads. The usual host makes sure no one talks during the sets, twitches the knobs to ensure the sound is at its best. Yes the music and its conveyor are king. This host is nice and cool and relaxed.

Robert compliments Coeur Vaillant as the musician returns to his seat. The host then performs. It is not the regular host, known as Joe Bagpipes. Shame, I wanted to finally meet him. This organiser performs what I understand to be Harvest (Neil Young). He follows up with a second song that sounds like a Nick Drake’s cover.

I am suddenly feeling tired and ill at ease. It’s humid and hot. I realise I need to leave before the end. Shame. It was a nice hour and a half shared with music lovers and music givers. I hear there’s another open mic on Thursdays but this time at a nearby venue, Stage & Radio at 7pm. It will be for another time. Robert will stay as usual until 11pm. But I need to end my night right there, right now. It is outside that I meet the Valleys again and get a lot of information about them. I am outside so I am feeling better. Live is well and truly back and that has made me feel great. But it seems that this whole lockdown thing has made it a little more difficult to be in crowded places for a long time. Or maybe it is the heat and humidity, whichever came first. Either way, I was happy to have been there and to have listened and witnessed some of the great next generation of musicians.