I met the members of the band Hope Country when we were both performing at Sofar Leeds only a few days ago. Sofar stands for songs from a room and is the cosy and secret meeting of music lovers to sample their passion in an intimate and hidden setting. An average of 3 artists present 25 to 30 minutes of their songs to a quiet and attentive audience, every musician’s dream, and if they would admit, part of a bit of their nightmare. How this precious event came to pass is a story in itself that sets the scene of what is all at once a phenomenon and hidden jewel; it starts with two guys who carried their love of music from a few friends in their living room to a monthly music meeting in over 400 cities worldwide.

Every event takes place at a different venue and the secrecy is preserved in many more ways. This time, the event is taking place at ThoughtWorks, a space that increasingly shares its generous facilities for various occasions.

A few weeks before SoFar Manchester, its sister event in Leeds was showcasing a wonderful display of the spirit of Halloween, a great venue worthy of the secret to be held and performing talents as varied in delivery as they were in motivation. From being in front of the camera at that particular event, I found myself behind it in Manchester, with the opportunity to savour the country flavours of Hope Country anew and to discover some other talents. 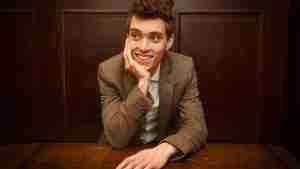 Chris Tavener started the show on his guitar. I read somewhere that he is a ‘satirical singer-songwriter, known for his comedic, witty lyrics and a vintage sound’. That gives me some hope when I hear him starting with a song that says ‘praise him’. Hopefully he is not preaching, there is a time and place, methinks. But soon, what I heard makes sense, both the rumour I quoted and the lyrics in his songs. And as the song starts revealing its sense, so do laughs start bursting around. He is funny. His lyrics, his voice, his delivery, the face he makes like a character lovingly wrinkled by inner laughed, everything in his air is made for this. And when you think that song was surely the only facet he had, he unveils another then another, then…

He starts the show with the church of Harry Styles, then takes us into a twisted fairytale of Modern romance, inviting us to laugh with him throughout his set. His distinctive voice and sense of comic timing are an impeccable fresh take on melodic comedy. Postcard home is a letter to the older generation as a response to their go at millennial travelling. He is such a musical comedian, with a way to get the audience in and with. He sounds like the kind of person we want as a porte-parole to life’s ironies or just to highlight the silver comic lining at the pit of life. The end comes to soon but then it is a take on David Bowie’s Space Oddity which makes us smile with melancholy at the recognition of the melodic progression and then burst into laugh as the lyrical parody reveals itsels. The artist is in tone and body like a mannequin animated by music and comedy. At that moment, you feel something that a member of the audience very graciously told me at Sofar Leeds – ‘You know when you’d rather be home

and look for any excuse to bail out of a night out because you are so tired from work and because home is cosy and practical; and then you hear such melodic art that takes away everyone of your excuse, making you realise how worth it the whole experience was and how great it can be to go out?’ Yes, that is exactly how I felt. Being out, and in this experience – Totally Worth it. 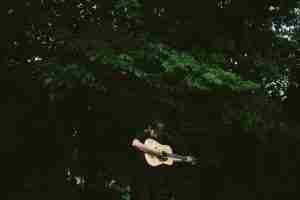 This time again Hope Country was the second act to perform. Yet again, they delivered this homely country feel that reflects the atmosphere at a Sofar concert. This is a very different experience from the previous performer but that is the point. SoFar showcases talent, diversity in talent, and can take you in a couple of hours through very different experiences and emotions. Brent Johnson on lead vocals and guitar sings heartfelt and raw sounds and the pair deliver a stripped down acoustic rendition of songs that their album promises to dress up. They have embraced the intimate feeling of the atmosphere and the audience have been moved with every chord, even the sparse sounds.

These are their last tour dates, and they are showcasing a new self-titled album. They are soon returning to Minnesota. They are sad to go but happy to perform and that bittersweet melancholy envelops the wave of their sound. They are performing the same set as in Leeds but the contemplative sound takes me in again… starting with the cry  “I am nothing without you” right in the first song ‘falling away’. The second song is about growing up in Wisconsin and missing it after a while in the city. ‘Let love grow’ it says and calls itself, as the heart grows fonder. There’s a catchy home-dedicated lullaby hidden behind this country vibe and a silent call to the public to join in harmonies. A couple of new songs are performed, one about baby June, an outspoken lullaby called ‘Sunday Morning’. It is another song to move your head to but like everything one enjoy, it ended far too soon. The working title of the next song is ‘out of the darkness’ but it is hard to get the phrase ‘there’ll be fire, there’ll be smoke’ out of one’s mind once you have heard it. Yet I must speak of the last song is River. I t is about Love again. But the way in which this waltz is introduced with the dominant note in each bar being the only one played during the first verse gives it such a quiet and deep power. I’m stealing that. More music soon joins the sparse notes but here and there continues to give some space for the song to breathe. What a lovely way to let silence speak to the listener. 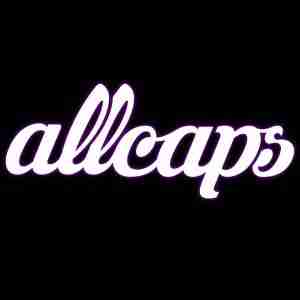 The last band is All Caps. They describe their sound as neo-soul jazz, rooted in jazz studies and complementary musical elements. There are 6 of them but they perform their first song as an acoustic duo to fit the SoFar ambiance. The first title is Midnight Calls. The lovely voice of Helena, the singer, and the electronic-jazzy sound of the Nord stage piano is already making love to the audience, giving such a stripped yet multidimensional fairytale-like background. Their midnight calls are capturing the audience.

The rest of the band joins in for the second song, I know. The bass gives the song its beat and its spine, together with a contemporary R’n’B feel. The sound of two wind instruments rises doing their thing without any one of them overpowering the atmosphere or the song. The voice is taken in and dances on these jazz backgrounds.

Later on, the singer tell us that the song was inspired by the album Frank by Amy Winehouse. She also explains why, for the second song, she will leaving the stage to the boys for a jazzy instrumental. The song harbours a riff reminiscent of the next question in an introspective quest.

We come out of the secretive shadows of a jazz club so that the vocalist can blend in anew her jazz and R’n’B sounds. Manner is the instrumental and is written by Janek Gwizdala, a big influence for the band who has covered the artist a few times. Last tune is Something Blue, a lovely song that the band has not as yet recorded. On a background of rhythm and jazz, Elena lays her vocals still letting the boys do their thing between the lines. It is the last song. It is the last band. They are Helena Debono on vocals, Joe Boyes on electronic piano, Patrick Martin on trombone, Stuart Wilson on trumpet, tuba, Jake Dickens on bass, Joshua Smout on drums. Dan Brunskill- Alto Saxophone